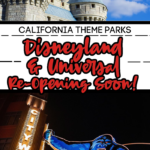 Surely this is a sign of things returning to the semi-normal right? I know that California has had some of the strictest lockdown rules and I am sure many are ready for even a tiny bit of normal to return.

Governor Gavin Newsom’s four-tier Blueprint for a Safer Economy has guidelines and opening dates for the theme parks.

According to the updated guidelines from the state’s health department, the California theme parks can reopen on April 1st, 2021.

The parks have been closed since March of 2020. It has cost billions of dollars and tens of thousands of jobs, due to the pandemic.

Some of the parks were able to partially reopen for special events and food festivals, although this was without rides being opened.

Under Newsom’s “Blueprint Refresh” theme parks may reopen as soon as April 1st. This is as long as the counties the parks are located in have reached the red/substantial tier 2 risk status.

What parks are included?

Back in October of last year, California officials had issued reopening guidelines that were different for smaller theme parks.

Small parks were allowed to reopen in tier 3. The large parks were not allowed to open unless they reached tier 4. Even at those tiers, capacity was limited to 25%.

The “Blueprint Refresh” does not make any distinction between large and small California theme parks.

We appreciate the administration’s willingness to work with the state’s theme parks on the finer details of the plan so parks can responsibly reopen soon, putting people safely back to work and reinvigorating local economies.

How the tiers work

If the counties have reached the red/substantial tier 2 risk status, then starting on April 1st, they may reopen at 15% capacity. This will be a step-by-step process.

The catch… the theme parks will only be open to California residents, so don’t make plans to travel there anytime soon.