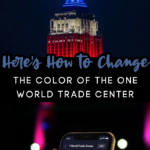 Did you know that you can change the color of the One World Trade Center?

That’s right! Anyone who possesses a phone can switch the color scheme of the spire attached to the One World Trade Center that just so happens to light up the sky as soon as night falls!

The sky high building that shines bright like a diamond changes colors during the holiday season or on a whim by someone with two fingers and a phone, thanks to a viral TikTok by @thereal_gohil who showed New York’s secret.

In the hands of cellphone users, the spire of the One World Trade Center can change from red, to orange, yellow, green, blue, purple, and pink.

How Do You Change the Color of the World Trade Center?

Thanks to Spireworks, you can send in a request online to be selected to change the color of the tall building but if you’re a New York resident, you already have access.

If you’re one of the lucky ones to live in Sven, a 958-unit Durst Organization property in Long Island City, Queens, residents who live in the luxurious tower can light up the city in color by choosing their favorite shade they wish to illuminate on the One World Trade Center.

With just the tap of a finger, you can decide the fate of part of New York’s skyline with several color choices at your discretion.

Now how cool is that?

Which means your next visit to the big apple can potentially change the color of New York’s landscape!

So which color would you choose?