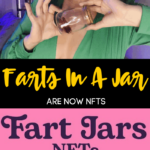 Can someone help me out, explain to me why this is an actual thing that people pay money for?

I mean, more power to the girl, but I still need to know why people are paying for this…

Stephanie Matto is the 31-year-old woman that is making a living selling her farts in jars, yea… I’m not kidding.

You may recognize Stephanie from her time on ’90 Day Fiancé’, I don’t watch the show so she wasn’t on my radar until I saw her bizarre way of making money.

The Woman Who Sold Farts In A Jar

I have a lot of fetishes and one of them is that I like the smell of a woman. I like all of the smells.

A man going by the name of “John” told Insider

Recently during the fart bottling prep process, she ended up in the hospital and has had to back off of her fart production.

So instead of ditching her fart selling business completely, she’s moving on to sell them in digital form in the NFT world.

A digital artist contacted Stephanie Matto with the idea of taking the concept of the fart jars and turning them into digital art to sell as NFTs.

What Is An NFT?

NFT stands for a non-fungible token and is used with digital goods.

I’m not educated on NFTs at all, and I don’t understand it… this old dog isn’t capable of learning these new tricks.

Her new business model, Fart Jars NFT launched this past week and is selling for 0.05 Ethereum which looks like it translates into $186 dollars each.

We teamed up and made jars with really cute animations. And we made them super custom and personal, and some even come with unlockable traits.

We live in a weird freaking time right now and I just can not believe this is where we are as humans.

The more and more I worked on it, the more I realized how cool it is learning more about crypto and just the whole entire concept of NFT is really amazing and cool to me. So I kind of felt like this was the direction I wanted to go in.