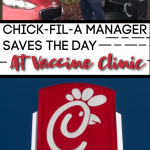 If there’s anything we can all agree on regarding Chick-fil-A is that they are the cream that rises to the top.

The workers are professional, organized and most importantly, time savvy which is why it is at no surprise that the town mayor of South Carolina called in the big guns when a drive-thru Coronavirus vaccine clinic became severely backed up.

Shortly after the drive-thru was opened the computer systems handling registrations shut down, causing hundreds of people to wait in heavy traffic.

They say not all heroes where capes, but possibly Chick-fil-A suits?

Jerry Walkowiak, the manager of a nearby Chick-fil-A restaurant stepped in to save a frenzy at a nearby clinic.

“When I heard about it, I called Jerry and asked if he would come help us out,” Mount Pleasant Mayor Will Haynie told CNN. “After he looked it over, he said, ‘There’s your problem right there. It’s backed up because you have one person checking people in.’ Then he showed us how to do it right.”

With the additional help of a few volunteers, Jerry Walkowiak was able to turn the drive-thru from an hours-long wait to just 15 minutes sitting in the car.

More than 1,000 people received the vaccine that day according to the town mayor and thanks to the brave work from the Chick-fil-A manager, Mr. Walkowiak will be returning to the drive-thru on February 12th for everyone’s second dosage!

“At Chick-fil-A, we’re about being the most caring company in the world, and when Mayor Haynie asked us to come over, we took a look at what was their drive-thru system,” Walkowiak told news station WCBD.

Is there anything a Chick-fil-A employee can’t do?