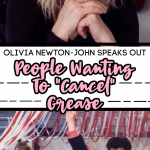 Just after Christmas, I wrote about people wanting to “cancel” and ban ‘Grease’. It’s one of my all-time favorite movies and it really bothered me.

Grease is on. It really has a terrible message doesn’t it?

Finally, Olivia Newton-John spoke up about it as well. It seems she and I have a lot of the same feelings about this “movement”.

It was screened by the BBC on Boxing Day, and apparently, people now feel the need to over-analyze the movie. Y’all, seriously… it’s been out for like 40 something years.

We need to relax a little bit and just enjoy things for what they are. I didn’t see it like that at all, I think it’s a fun movie that entertains people.

Just a few of the terms used by critics recently to describe the movie were ‘misogynistic’, ‘rapey’ and ‘slut-shaming’. Some of them are calling for the removal of ‘Grease’.

GREASE IS A GOOD MOVIE IDC WHAT ANYBODY SAYS

Listen to Olivia Newton-John below in her own words about how she feels about this drama.

646 shares
This Chick-fil-A Manager Saved The Day At A Drive-Thru Coronavirus Vaccine Clinic and They Deserve A Medal
← Previous
Here's The First Trailer For The 'Punky Brewster' Revival With Soleil Moon Frye
Next →
Click here to cancel reply.