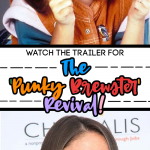 I’m seriously aging myself with this, but ‘Punky Brewster’ was my show as a kid! I loved everything about her quirky little self!

Well, just like me… Punky Brewster is a full-grown woman! And as an adult, she is still ruling that “Punky Power”!

Soleil Moon Frye is returning as her original character from the 80s sitcom! As an adult, she is a divorced mom of three children, that is working on getting back to the quirky character we all know and love.

She even helps an orphan named Izzy, kind of a throwback to her childhood. In the trailer, you can see that Izzy is so much like the little girl we all knew as Punky.

Punky is still sporting 2 different shoes and can be seen in the trailer with two colors of Converse. She also is a professional photographer in the new series, how are we so alike?

I actually own the original ‘Punky Brewster’ series and have watched it with my own children. Hopefully they’ll be down to watch the revival with me as well.

‘Punky Brewster’ will stream on Peacock beginning February 25th, 2021. This is a 10-episode series and we’ll just have to see where it goes from there!

801 shares
Olivia Newton-John Just Responded To People Wanting To Ban ‘Grease’ and It Is Pure Gold
← Previous
This Map Shows The Most Popular Valentine's Day Candy And To My Surprise, One State Voted For Candy Necklaces
Next →
Click here to cancel reply.