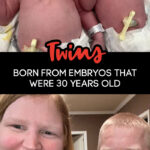 There is a couple in Knoxville, Tennessee who just welcomed bouncing baby twins.

That doesn’t seem like anything out of the ordinary or special.

But, THIS set of twins was born from embryos that were frozen over 30 years ago!

The donated embryos were originally frozen in April of 1992, but just NOW defrosted, implanted, and carried to term.

The frozen embryos resulted in the live birth of 2 babies — Lydia and Timothy — twins born on October 31.

According to CNN, the embryos were frozen by an anonymous married couple at a facility on the west coast.

For nearly three decades, they sat in storage on tiny straws kept in liquid nitrogen at nearly 200 degrees below zero, in a device that looks much like a propane tank.

Now, as you might imagine, these embryos just may be the oldest embryos to be frozen and viable.

There is something mind-boggling about it — I was 5 years old when God gave life to Lydia and Timothy, and he’s been preserving that life ever since.

We’ve never had in our minds a set number of children we’d like to have — We’ve always thought we’ll have as many as God wants to give us, and … when we heard about embryo adoption, we thought that’s something we would like to do.

“Embryo adoption” isn’t a technical term. It isn’t really like a traditional adoption at all.

It’s merely the process of taking embryos from one person — or couple in this case — and transferring them to another couple in order to build a family.

The Ridgeways actually WANTED the embryos that had been waiting the longest in the IVF facility.

They weren’t told that these embryos were technically the oldest, they were just given a donor number and a list of donor characteristics — ethnicity, height, weight, age, genetic and health history, education, occupation, favorite movies and music.

The couple used the smaller donor number, and just kind of assumed that a small number meant that the embryos had been at the facility the longest.

According to CNN, “the age of the embryo shouldn’t affect the health of the child. What matters more is the age of the woman who donated the egg that went into the embryo.”

The Ridgeways already have four children — 8, 6, 3, and 2 — none of which were conceived via IVF.