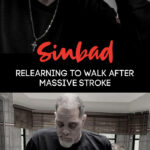 From movies, to TV shows, to appearing in his own HBO special, it seemed like Sinbad was everywhere.

Then, 2 years ago, tragedy struck when he suffered a major ischemic stroke — one that could have killed him.

A blood clot traveled from his heart to his brain, and cut off the oxygen supply to critical parts of his brain, as happens with a stroke.

Not only did he have that initial blood clot, he then suffered ANOTHER clot.

That clot was followed by brain swelling, which led to a brain bleed.

According to his family, Sinbad was fighting for his life, confined to the hospital for 9 months before finally being released.

Survival odds from this type of event are approximately 30%. Sinbad has already beaten the odds and has made significant progress beyond what anyone expected, but there are still miles to go.

Now, he is having to relearn how to do pretty much everything.

He continues to receive therapy, fighting for every inch. His progress is nothing short of remarkable.

It can take years for the neural pathways in the brain to reroute and find a new way to connect to the body.

Coming back from a stroke can be a LONG and excruciating journey that I wouldn’t wish on anyone.

But, Sinbad is working all his therapy — physical, occupational, and speech therapy — and relearning the things that were once second nature to the comedian. Things as basic as walking.

I am not done. I will not stop fighting until I can walk across the stage again.

His family has now set up a website to inform the public about his progress on this journey, and give a monetary gift toward helping with his medical expenses.

Thank God for everything He’s given you, even if it’s not everything you asked for. Thank God for family and hug the ones you love while you’re still with them. We need each other to get through this journey. I can’t wait to see you all again soon.