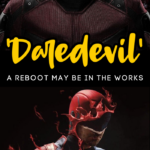 Daredevil. Maybe I’m just old, but when you say Daredevil, I see images of that AWFUL 2003 movie with Ben Affleck and Jennifer Garner.

I didn’t even realize that Netflix had brought Daredevil back to be a crazy good Netflix original series. The only reason I now know it was a series is because my nerd-o husband just spent 45 fun, unsolicited minutes explaining the entire thing to me.

Man, when they say the Marvel Cinematic UNIVERSE, they aren’t joking!! That thing is HUGE and geniusly intertwined! It seriously requires drawings and diagrams to plot the whole thing out.

It turns out, there are rumors that Daredevil may once again be a solo series — and, trust me, my husband is giddy!

According to Comicbook.com, “most consider the character a lock to appear in Spider-Man: No Way Home.” But, if you are a fan of the Stan Lee character that is Daredevil, you may get more than just a random appearance in a movie dedicated to Spidey.

Is there going to be a Daredevil reboot??

@RPK_News1, which is an online scooper, has taken to Twitter to more than suggest that a Daredevil project is in the works!

Now, we have no idea if this means that Daredevil will be a film, a Netflix reboot, or — heck — even a Disney+ series.

If you ask Charlie Cox, the actor who portrayed Daredevil in the Netflix series, he is tight-lipped about the whole thing.

My answer is no comment; I don’t know what’s going to happen. I genuinely don’t know. If there was a chance of that happening in the future, I don’t want to say something that could potentially jeopardize those chances. The people high up at Marvel, maybe they see this stuff or they hear what I say or blah, blah, blah… maybe that influences it.

Charlie is fully aware that fans would LOVE to see Daredevil brought back to the MCU, but he doesn’t know — allegedly — if it will happen or not.

I don’t know, I have no idea. I love how passionate the fans are and I feel very, very touched that so many of them have gone online and made their voices heard about their desire for me to come back and maybe in the future that might happen, and that would be great. Who knows? We’ll see.

But, right now, we can pin our hopes of a Daredevil reboot on one little Tweet in the Twitterverse. Let’s hope — cross our fingers and toes — that this is a legit spoiler!!