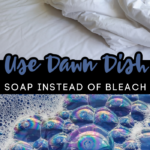 When it comes down to getting our whites white, bleach is the number one thought.

While you’re not wrong for using bleach, bleaching your white towels, bedsheets, and shirts in time will turn them more yellow than white.

So if you want your sheets as pearly as your teeth, apparently dish soap isn’t only for washing dishes.

How to Make Your Sheets White Other Than Using Bleach?

Washing your white laundry in Dawn dish soap rather than tossing in bleach will not only make your whites bright white, but the soap also helps to remove those pesky stains such as the morning coffee spill or the splattered marinara sauce.

The best part about using Dawn is the amount of soap needed to re-white your clothing which by no surprise, is less than what you would use if you were using bleach!

How to Use Dawn Dish Soap In Laundry

All you need to do is pour some Dawn dish soap onto a white item in your laundry. A small white washcloth works well.

Then toss that into your load of whites and wash as normal.

So rather than attacking grease from your evening dishes, bombard the whites and fight stains with the soap you would usually use to clean the dishes!

So ditch the bleach and grab the Dawn dish soap from the sink instead; you won’t regret it!

Snag the blue Dawn dish soap, it works the best to make sheets and clothing white!