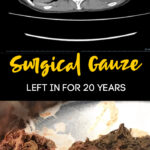 You hear horror stories of things like this accidentally happening, but it’s pretty rare that a piece of surgical gauze hides out for so long stowing away in a patient’s body.

But that is exactly what happened to one lady who underwent several surgeries to eradicate her cancer back in 1999.

According to the New York Post, this unnamed patient underwent a gastrectomy and epiploectomy before undergoing chemotherapy for her gastric mucosal adenocarcinoma — gastric cancer.

The patient remained completely asymptomatic for 20 years with the presence of a considerably large foreign body in the abdominal cavity.

The GOOD news is that they were able to send her cancer into complete remission.

The BAD news is that her surgeon left behind a little present in the form of surgical gauze in her abdomen.

20 Years after the incident, the patient began to experience unexplained anorexia. She had severe abdominal pain — well, yeah!! — a fever she couldn’t shake, “night sweats, and swelling in her lower right limb.”

She ended up in the ER, where they ran a battery of tests on her, including an ultrasound scan that showed a large wad of — something — in her abdomen.

The only explanation for the foreign matter lodged in her abdomen was one of the surgeries that she had undergone two decades prior.

Surgeons were able to remove the gob of gooey gauze from her abdomen without a hitch.