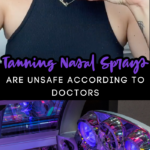 Not all trends are good on TikTok.

As the urge to tan skin becomes greater during the upcoming summer months, individuals on TikTok have found a new way to darken their skin to prepare for summer.

Despite the viral views, doctors are warning against tanning nasal sprays because of the very serious side effects that come along with the spray bottle.

Several content creators are claiming that the nasal sprays help their skin become kissed by the sun, but doctors are warning that these products could not only be ineffective, but dangerous too.

The sprays that claim to increase production of melanin in the skin after inhaled through the nose, TikToker @hannahtayy went viral for sharing a video using the product that was later taken down, the popular content creator recently made another video filming what’s inside her tanning bag, including the popular nasal spray.

“I mean I’d rather die hot than live ugly,” the TikToker lip-synched in the viral clip.

Other TikTokers who have also tried the nasal spray to get golden show theirselves inhaling the nasal spray while some spray the product up their nose before heading to a sun bed.

Doctors who suggest that shoppers should think twice before buying have explained why the product is not safe.

“In the US, all nasal sprays or inhalation solutions are classified as drugs, which means they need to go through a New Drug Application process in order to legally be able to sell in the US,” cosmetic biochemist Krupa Koestline told Allure.

The publication also notes that many of the sprays contain dihydroxy methylchromonyl palmitate, which in other words is “a self-tanning ingredient that helps increase melanin production when used topically.”

With that being said, this ingredient has not been approved for inhalation by the U.S. Food and Drug Administration.

“There’s no proven safety of ingesting dihydroxy methylchromonyl palmitate at all,” dermatologist Dr. Nancy Samolitis explained to Allure. “Whether or not it works, we don’t know.”

Dr. R. Peter Manes, a rhinologist at Yale Medicine explained to Everyday Health that inhaling these substances can not only result in multiple serious side effects, but the side effects could also last indefinitely.

“Nasal use of medications can affect things like one’s sense of smell. They can also potentially be toxic to the cilia of the nose, which allow the nose to move mucus through it normally,” he stated.

So parents, and young adults, tanning nasal sprays are the latest dangerous beauty trend on TikTok so make sure to keep them away from these products or discard them immediately if your teenager has already bought it.