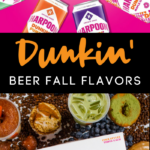 Dunkin’ and Harpoon Brewery are teaming up again for donut infused beer and fall flavored sips.

The two beverage companies are pushing aside old flavors and making room for three new beers that just scream autumn.

With the exception of one flavor that’s sticking around for another year, the Dunkin’ Pumpkin Spiced Latte Ale, individuals who are over the age of 21 can look forward to Dunkin’ Blueberry Matcha IPA, Dunkin’ Maple Crème Blonde Ale, and Dunkin’ Midnight American Porter.

Starting with the IPA Blueberry Matcha, this new beer features inspiration from Dunkin’s Blueberry Matcha Latte made with blueberries and matcha, giving the drink a bright and juicy flavor in a 6.6% ABV beer.

The new blonde ale is made from actual Dunkin’ donuts and maple syrup, so think of a maple crème donut all wrapped up in a 5.5% ABV beer, while the Dunkin’ Midnight American Porter includes the coffee chain’s Midnight roast for a dark and chocolate-y 6% ABV beer taste.

All in all, you have one beer that’s pumpkin flavored, another that has chocolate, one made with donuts and maple syrup and finally a combination with blueberries and matcha!

So if you live in the Boston area or visiting for personal matters (like taking a trip for beer tasting), you can get your hands on a six-pack by visiting any Buffalo Wild Wings in the area starting in October or by using the Harpoon beer finder.

Although if prefer to taste the beers ahead of time, the brands are celebrating the launch with a Dunkin’ Walk-Thru at Harpoon Brewery on August 30th from 10 a.m. to 1 p.m., for an exclusive first taste of the new beers alongside a free Dunkin’ Harpoon IPA Donut filled with Harpoon IPA jelly topped with candied malt crumble.