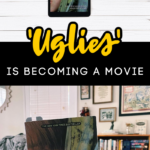 If you know, you know. And, if you DON’T know, you should totally find out.

Uglies is one of those dystopian roller coasters of a book that you just want to get on, hold your hands high in the air, and enjoy every minute of it!

If you enjoyed the YA trilogy that was, is, and forever will be one of the greats, you are about to jump for joy!

Uglies is being made into a Netflix Original Movie!!

The story, which occurs in a dystopian society 300 years in the future, is about a culture that is OBSESSED with beauty. So much so, that on their 16th birthday, everyone has the “pretty” surgery that elevates their outward appearance to society standards of beautiful.

Young Tally is all set to go ahead with the operation on her 16th birthday, but fate may have other plans for her.

BUT, if you DON’T read (first of all, I don’t think we can be friends) you can watch the story on Netflix sometime next year!!

Read the book, and then watch the movie!! You won’t be disappointed!

The film is set to star Joey King as Tally Youngblood, the story’s protagonist.

Yes, you have heard Joey’s name before. She was in Ramona and Beezus, Crazy, Stupid Love, The Act, and she played Elle in The Kissing Booth.

In fact, it is her new production company, All The King’s Horses, that is taking this Uglies venture on!!

Joey will be joined by a freaking awesome cast. Get this —  Chase Stokes (from Outer Banks), Brianne Tju (from the I Know What You Did Last Summer TV series), and Keith Powers (from The Tomorrow War).

This is going to be one AWESOME movie, based on an amazing book, and I can’t wait!!

There isn’t yet a trailer, but we will be hot on the trail, and will bring it to you as soon as we hear anything.

When will this movie be available? Well, we don’t exactly know. They are currently in the production process, and will hopefully bring it to us in late 2022 or early 2023.