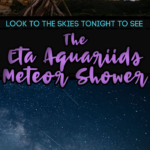 Early this morning, Wednesday May 5th, The Eta Aquariids meteor shower peaked, but that doesn’t mean you can’t still see it!

The meteor shower actually started on April 19th and you can view it until May 28th.

Actually, even though the peak of the meteor shower was early wednesday, tonight should be a pretty goo show too as we move in to the early hours of May 6th.

The hardest part of viewing meteor showers is too much light interference and a full moon has a huge impact.

Thankfully tonight we will still have a waning crescent moon in the sky so the light interference will be minimal.

You’ll still need to get away from city lights for the best view as well.

NASA says that stargazers can expect to see about 40 or so meteors per hour.

These meteors originated from Halley’s Comet, which can only be seen once every 76 years, according to NASA.

Halley’s Comet won’t make another appearance until 2061, however, the last time it did was 1986!

So, look to the skies and enjoy nature’s light show!