Disney Has Created A Real-Life Lightsaber and I Need It 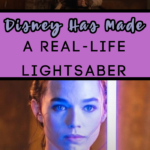 Disney has turned the one prop that every fan wishes they had from the Star Wars series into reality.

Lo’ and behold, Disney Imagineers have created a real-life lightsaber.

Yesterday on May 4th, also known as “May the 4th Be With You” for Star Wars day, Disney has released an incredibly short clip showing the first real lightsaber in all of its shining glory.

A Disney performer dressed as the “Star Wars” hero Rey, unveils the retractable blade of purple light from the hilt, just like in the movies except this time, there are no special effects.

However, Disney has not created a real life lightsaber that can cut through human bone or skin.

Disney’s Imagineers have created a device to function with a “blade” of light that extends from the base of the sword.

For now the saber of light is not for sale, at least for now that is, but Disney fans can expect to see the sword in action at Disney’s new Star Wars: Galactic Starcruiser hotel that will be opening in 2022.

“Watching that lightsaber activate right before your eyes will be just one of the countless ways that, from the moment you arrive to the moment you depart, you’ll be plunged into a Star Wars story where your decisions and actions — or even the casual conversations you may have — determine how your personal journey unfolds,” Disney Parks wrote in a blog post on Tuesday

The new hotel will feature look alike scenes from Star Wars from the moment you step aboard until the final moments of departure.

Disney guests who get to live on the ship will experience a life like experience as each family is plunged into a galaxy far away that will include interactions with familiar characters, exquisite dining experiences, and even having the opportunity to train in the ancient ways of the lightsaber!

1 shares
Here's How You Can See The Eta Aquariids Meteor Shower In May
← Previous
People Are Turning Their Pool Noodles Into Coral Reefs And It's Genius
Next →
Click here to cancel reply.