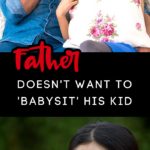 Say it with me — “It’s not babysitting if it’s your own child.”

It can most definitely be stressful. It can be inconvenient — although that’s a tough word to associate with your child. There might be eleventy hundred other things you want to be doing.

Heck, there may be 20 other things you HAVE to be doing. Welcome to a mom’s world!

But, it’s your child.

“Man-up” and take the responsibility for what it is.

There was a dad on Reddit who didn’t want to take on the responsibility of watching his child, and the internet was having none of it.

And, quite honestly, the dude comes off looking a bit like an a**hole.

So, this dude bought a plane ticket for his wife to go to Italy to see her grandmother for her birthday.

He also bought a ticket for their 4-year-old daughter to go with her.

The wife doesn’t want to take the daughter, because she wants some real adult time away. Which is totally understandable.

If she is a stay at home mom, she is with the daughter 24/7. She just wants a real break.

And it’s not like it is for an exorbitant amount of time. She’d only be gone a week.

BUT, the husband is complaining, because he doesn’t want to “babysit” his daughter.

” — there’s no way that are daughter can not go if she goes. Because I have work and don’t want to take time off to babysit our daughter for an entire week.”

He basically gave his wife a gift that gives HIM a free week at home — pretty much living the life of a bachelor — while she is trying to visit family whilst taking care of a toddler.

Granted, he would have to take an entire week off of work (boohoo) to stay with the child — because he can’t think of anyone who would want to watch the girl while his wife uses the birthday present. You know, the one he got her.

I suggested we have someone else watch her, but we don’t know anyone that lives close by who’d be willing to watch her. I love my daughter, but I don’t want to take a week off to babysit her

Of course, commenters had a lot to say — over 4,000 comments worth of what to say — to this father.

As you can imagine, the majority of the commenters agreed — he is an a**hole.

If the child is legally yours, you are not “babysitting.” You are coparenting a human being.

You don’t get to complain about it. You don’t get praise and accolades for doing it. It is your job as a father.

I’ve had to take time off work — when my daughter was sick or the daycare was closed. It’s just something you suck up and do.

Think about this. The wife is supposed to take a lovely vacation to see family — while taking care of her 4-year-old daughter the entire time. *Eye roll*

Not only is he wanting his wife to travel internationally alone with a child, he wants her to take care of the child the entire time ALONE, while she is supposed to be seeing her family.

AND THEN, think about the fact that we are in a pandemic. That adds another layer of complication that the mother would have to deal with.

It would be NO vacation for her.

Let’s remember — at 4 years old, the child can’t be vaccinated. That puts her, not only at a higher risk for getting COVID — it’s possible she could pass it on to the grandmother.

It’s probably (read: it’s totally) best that an elderly grandmother have as little contact with as few people as possible during this health crisis.

Man, I wish we knew how this played out.