I went to the grocery store today and it didn’t matter which aisle I went down, I heard this low humming sound. At first I thought it was my cell phone. Nope, that was still at home on the kitchen counter along with my grocery list. Then, I looked for something in the shelves. Nope. Was it the AC Units? I looked everywhere before I realized it was the kids. Every single child in that grocery store had a fidget spinner in hand and were busily whirring it around and around like so many tiny little ninja throwing stars. Or fans. Except they didn’t put out any cool air. They were just these humming Children of the Corn focused on whipping those things around faster and faster. It. Was. Terrifying. That’s when I realized fidget spinners truly are ruining America! 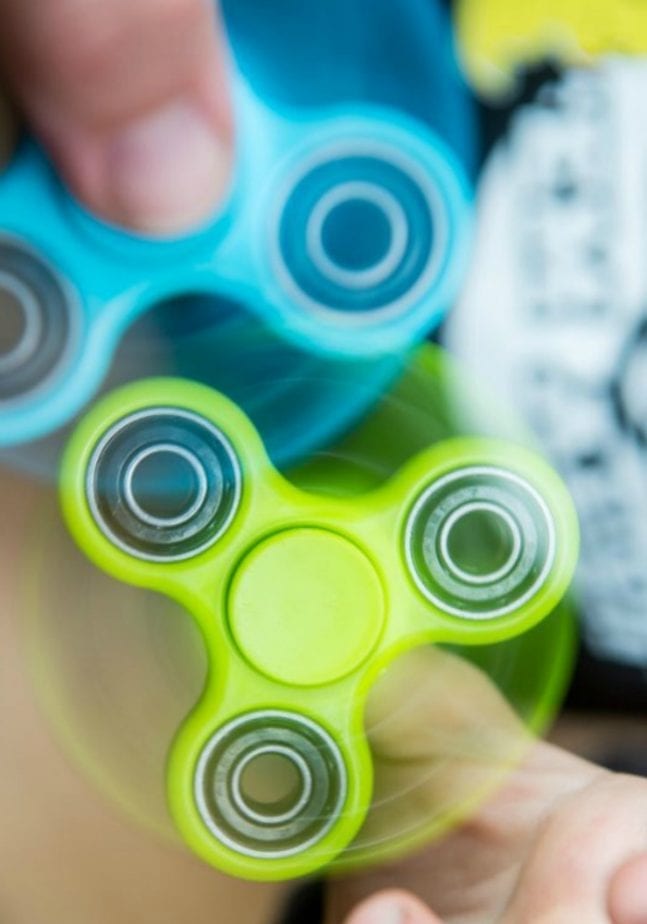 Don’t worry, they’re not ruining it in any new and spectacular way. It’s not like someone reinvented the Pet Rock here. Or, well, kinda they did. Autism and ADHD proponents say these fidget spinners help kids fidget while focusing on other things, but as I saw three of them whip past people’s heads in the store, I had to wonder what other things those kids were focused on.

But again, this isn’t anything new. It seems every few years there’s a new fad that every kid needs to take part in, and every parent eventually finds a reason to hate. Remember Pogs? How about Flippers? This one may or may not be beneficial, but for those kids who really need it my guess is it’ll be just as short lived as all the other fads. Why?

Because someone is going to get their eye poked out with one of these things. Or some kid will bring one to school that has lights on it or makes whistling noises, and then that school will have to ban them for everyone. So kids who actually benefit will have to go back to clicking their pens or chewing on things like they were before the fidget spinners came about.

And really, these fidget spinners are fairly benign as far as things go. They’re cheap (or can be), and easily replaced once they break (and when kids are involved, everything is bound to break), and because they’re small they can be kept in pockets and out of the way if they need to be.

But we’re talking about kids. Kids aren’t going to keep them in their pockets. They’re going to show them off to their friends. Or forget that they’re banned in that specific classroom and start spinning them in the open. And then they’ll get in trouble.

Over something that has the potential to be beneficial.

And so maybe it isn’t actually the fidget spinners that are ruining America, but rather our need to regulate every single little thing down to the Nth degree. Yes, these might cause a little distraction until kids move on to the next fad, but they will move on. And sure, someone might get hurt, but kids get hurt walking down the hallway. In our need to make everything safe and fair and even for our little precious bubble-wrapped children, we’re most likely going to take away something that actually benefits a few of them.

And there’s no reason to. Like I said, this is a fad. It will fade. The next fad is already around the corner, probably being manufactured in China as we speak. So for once, just for this once, maybe instead of banning these or regulating them or finding ways to make things ‘safer’ for all, could we pull back and just wait it out?

Because it turns out the thing ruining America probably isn’t the fidget spinners at all, but rather our overly-adult-need-to-make-rules-about-everything reaction to them. And THAT’S something we can control.