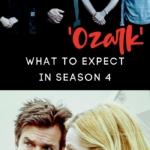 You can’t tell me that Okark isn’t one of the BEST shows on Netflix.

If you haven’t yet started the roller coaster thrill ride that is Ozark, stop what you are doing, turn on Netflix, and get to watching. You won’t be able to stop at just one episode!!

I never said it was kid friendly, but for adults it’s quite a ride! (cover your eyes, kids)

Unfortunately, we know that this is going to be the final season for our favorite Ozark family, and I’m going to need a moment of silence for the Byrde family.

Now, Don’t Go On If You Haven’t Seen The Show. There Will Be Spoilers.

Wendy, Marty, and the kids have been through SO much in the last three season: an affair that ended with a splat, laundered money, drugs and bibles, the sketch relationship with the Langmores, casinos, a death, a death, a death (they just keep stacking up), fields of poppies, the Mexican drug cartel, dirty lawyers, and it all culminated with fresh, bloody brains all over everything.

After the finale of season 3, I just sat there. I couldn’t even move. I just kept saying, “Did that really just happen?”

That ending just changed almost everything about the show, sending it in an ENTIRELY new direction. I nearly got whiplash from that 180 the show took!!

So, what is on tap for us in the final season of the show? Well, we don’t exactly know, but Jason Bateman (Marty Byrde) tells us to expect something big!

A super sized season means super sized problems for the Byrdes. I’m excited to end with a bang(s).

We can expect season 4 to be split into two parts — so you can look at it as 2 more seasons, if you want!

There will be 14 episodes in total, and I can almost guarantee you will be holding your breath throughout the entire thing! Hop on, and buckle your seat belt, because the roller coaster is about to start.

Obviously, the Byrdes are about to join forces with Omar Navarro — and by “join forces” I mean that they will try not to die at the hands of the Mexican cartel.

Netflix is introducing two new characters to the show this time around. Veronica Falcón and Ali Stroker will both allegedly play big parts in the upcoming season.

Veronica is going to play the back-stabbing sister of the head of the cartel, Navarro. She and her son are going to be scheming to get their hands on the reins of the family business.

Ali will be playing an old friend of Ruth’s mother, who hops onto the scene just in time to help out her dear friend’s daughter.

So, the BIG question is WHEN? When will Ozark drop into the Netflix lineup, and when will this entirely new scenario play out?

Well, we don’t have any idea, is the short answer.

It is entirely possible that Netflix will release the show later this year, but they may push it into 2022. We just don’t know.

That just gives you time to binge watch the entire show (again), and get all caught up on what’s going on in Ozark!