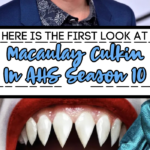 American Horror Story fans can finally take a deep breath as season 10 is finally in the works!

AHS has also welcomed ‘Home Alone’ star Macaulay Culkin for season 10’s cast which has made 90’s babies incredibly happy to see the star be apart of such a popular show.

While each season explores a different spooky story that will often bring back new and old actors, it’s obvious that this year’s season is expanding their crew starting with Culkin, as well as bringing back familiar faces including Sarah Paulson, Kathy Bates, Evan Peters, Adina Porter, etc.

Showrunner Ryan Murphy recently shared a glimpse of American Horror Story’s season 10 on Instagram by posting a picture of Macaulay Culkin in his new role standing alongside Leslie Grossman who will also be apart of AHS’s season 10.

We want more Ryan Murphy but for now, we’ll take the small bone you gave us.

However, we do know that Murphy has gone on record stating that he will also be working on American Horror Stories, a new series involving different stories for each individual episode, rather than following one storyline like American Horror Story.

The American Horror Story cast are experts at keeping their fans guessing and the official title for the tenth season is yet to be announced, like we haven’t already waited long enough; although for now, it looks like we’ll have to wait a little while longer for more clues to be announced.