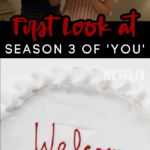 After the announcement of season three’s officially release date of the highly anticipated show of ‘You’, Netflix did us a favor and posted a few photos from the new season!

Since we now know that season three premieres right in the middle of spooky season and the name and gender of Joe and Love’s firstborn, it only makes sense to craft a family photo book.

Netflix threw together a compilation of family photos featuring Love and Joe holding their newborn, the couple staring down the glass cage in cleanup gear, Love working at the bakery, Joe visiting a bookstore, a suspicious neighbor, and finally, Joe taking a walk with his son wearing the same hat he uses when he stalks others…

Well that can’t be good.

You would think Joe would leave behind his ugly habits in the city but from it looks like, Joe may have brought his old habits from the city into his new suburban home and now, he’s teaching his son to do the same.

If there was any constellation that Joe may have changed for the sake of his first child, we were all wrong.

Season 3 of You returns on Friday, October 15th!