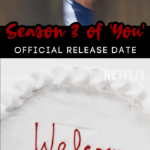 Joe Goldberg is officially a dad.

Since season two ended with a pregnancy bump, a new house, and a new neighbor, we can’t help but worry what Joe will do next.

In fact, even Joe is afraid that his first born will be too much like him.

Moving out of the city and into the suburbs, you would think Joe would leave his ugly habits behind, but from it looks like, it seems like Joe has brought his old habits from the city into his new suburban home.

Since the last episode of season two, there have been multiple whispers and rumors regarding when season three would finally drop ten new episodes on Netflix, but we’ve finally reached the light at the end of the tunnel.

Netflix has set the official premiere date in a “bloody” new teaser trailer revealing an important character which is Love and Joe’s first baby together, which by the way, is a boy and his name is Henry.

According to Joe, he says he can change for the baby, someone who his son would be proud of to call dad, but let’s just say that things, are easier said than done when it comes to Joe.

Season 3 of You will return for another chapter of murdery things on Friday, October 15th, right in the middle of spooky season; you can watch the new teaser trailer, here.