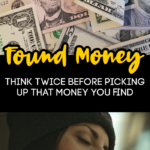 Money, if you think about it, is pretty disgusting.

Just think of how many different hands — unwashed — have held that same exact dollar that is in your hands. *Barf Emoji*

You never know what residue has stuck to that money in your possession. Mold, poop, food, blood, spit. There can even be drugs hanging out just ready for you to absorb into your skin.

Kinda scary if you think about it!

Infact, there was a story just this week of someone picking up found money, and allegedly coming in contact with a drug that was hanging out on that money.

According to Fox News, Renee Parsons was traveling through Tennessee with her family. They were hungry, so they stopped at McDonald’s to eat.

While there, Renee found a dollar bill inside the restaurant.

She did what we all would do. She picked up the dollar.

Not thinking twice, she brought the dollar into the car with her, and they started to go on with their trip.

Within minutes, her body started going numb. It started at her shoulders, and quickly traveled down her body.

Her suspicion was that the dollar had drug residue on it — her guess was fentanyl.

She ended up going to the hospital in Tennessee, where they ran a 6-panel drug test on her. It all came back negative, but she wasn’t tested for fentanyl.

There had been several instances where money found at a gas station had tested positive for methamphetamine and fentanyl.

Is this what happened to Renee? We don’t know, exactly.

But, it’s a good reminder to be careful. You NEVER know what’s on that money you stumble across.

You may think the stars are aligned just right, and it’s your lucky day. But, you may get just a bit more than you bargained for.