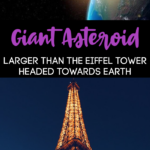 The asteroid is bigger than the Eiffel Tower and should fly right past Earth on December 11th, 2021.

It’s called 4660 Nereus and NASA is watching it, even though it will only come within 4.6 million miles of us at 14,700 miles per hour because many things can change that.

NASA has said that they expect the asteroid to stay about 2.4 million miles away from Earth as it passes, which equals out to about 10 times the distance between the moon and Earth.

In my basic human brain that seems like a non-threat, but according to NASA anything that is within 120 miles of Earth can be a potential issue.

Also, anything within 4.65 million miles is considered potentially hazardous to Earth according to NASA.

Even at that distance, it is still considered potentially hazardous because many things could push it off of its current trajectory and course.

At this time Asteroid Nereus isn’t expected to impact Earth or those of us living here in any way.

Several years ago I read a Young Adult novel called ‘Life as We Knew It‘ and the moon was knocked out of position and impacted everything about Earth.

I often think about stuff like that now, anyhow if you love dystopian novels be sure to check this one out!