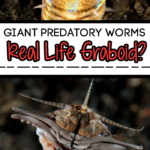 You’ve watched the ‘Tremors’ movies right? It was about ‘Graboids’, giant predatory worms, that would explode from the ground and attack its prey?

Well, fossil hunting scientists believe they have found the undersea lair of something very similar. A giant predatory worm that had lived in the ocean about 20 million years ago.

It’s believed that the 6.5 foot long burrows that were found belong to this predator. Paleontologists from the National Taiwan University in northeastern Taiwan reconstructed one.

It is a large, L-shaped burrow! They have dated it back about 23 million years ago. They did this by using layers of the seafloor with trace fossils.

We hypothesize that about 20 million years ago, at the southeastern border of the Eurasian continent, ancient Bobbit worms colonized the seafloor waiting in ambush for a passing meal.

The experts reconstructed one using 319 specimens. It was 6.5 feet long and 1 inch in diameter, not quite as large as a ‘Graboid’, but still terrifyingly huge!

When prey came close to a worm, it exploded out from its burrow, grabbing and dragging the prey down into the sediment. Beneath the seafloor, the desperate prey floundered to escape, leading to further disturbance of the sediment around the burrow opening.

They are comparing this prehistoric worm to the modern-day Bobbit worm (Eunice aphroditois), AKA “Sand Striker”. This one is pretty freaking scary too!

The Bobbit worm ranges from 4 inches to 10 freaking feet long! It also lives in a burrow in the ocean floor.

Fun fact, the Bobbit worm gets its name from the Lorena and John Wayne Bobbit case. Wonder why?