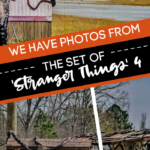 Photos from the set of season 4 of Stranger Things have surfaced online, and I’m just about giddy!!

It has been FOREVER since we have had a chance to visit our favorite ‘strange’ characters in Hawkins, Indiana.

We haven’t had the opportunity to catch up with Eleven, Mike, Dustin, Lucas, Will or the rest of the cast of characters of Stranger Things since 2019, and I can’t believe it’s been that long!!

Well, I mean there was the whole dadgum pandemic that brought the entire world to a screeching halt.

I guess we can forgive them that, but COME ON!! It’s about time to get to getting, and bring us season 4!

We still don’t have a solid date to look forward to when it comes to new episodes of Stranger Things, but we FINALLY have new pictures from the set of the upcoming season, so we KNOW they are working on it!

Three sets of Tweets from @strangernews11 show different shots of a trailer park that looks like it has been taken over by the Upside Down.

Now, these shots don’t give anything about the season away, because we have seen plenty of things in the Upside Down before.

But, it seems to be PROOF that things are moving ahead when it comes to getting us new episodes of Stranger Things. *Squee!!*

We were lucky enough to have received news back in October that filming had resumed on the set.

We also know that — SPOILER ALERT — Hopper is, in fact, ALIVE, but we don’t know how or in what capacity.

I guess, for now we will have to be happy about the fact that we finally get new photos of the set, and we know that season 4 is on its way — at SOME point.

If you want to see a teaser trailer for season 4 of Stranger Things, you can catch it HERE.