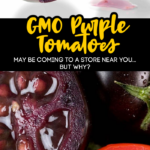 I seriously try to avoid genetically modified foods, they kind of creep me out.

Well, there is a new Tomato that has been created and while it looks interesting I am asking myself… but why?

The tomato has all of your traditional tomato features, except when it comes to color.

From a plant pest risk perspective, this plant may be safely grown and used in breeding.

The USDA said in a news release

The new genetically modified purple tomato has received USDA approval which means it could be found in stores as soon as next year.

They say that this new purple tomato has a longer shelf life and health benefits than the red tomatoes that nature provided to us, I’m not sure I buy the health claim.

A British biochemist named Cathie Martin is part of the team that developed the colorful tomato.

I wanted to start projects where we could look and see whether there were health benefits for this particular group of pigments.

She says that she wanted to create a tomato with increased antioxidant capacity, similar to blueberries, eggplants, and blackberries.

In the study, they showed that mice that were prone to cancer and ate the purple tomatoes lived nearly 30% longer than those fed red tomatoes.

It’s not like a drug, where there’s a single target. It’s about them having antioxidant capacity. It also may influence the composition of the microbiome, so it’s better able to deal with digestion of other nutrients.

They also did a study proving that purple tomatoes had a shelf life that was double that of a red tomato.

The tomatoes will launch in test markets in 2023 to find out if consumers are interested in the genetically modified purple tomato.