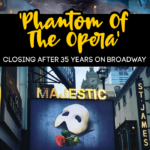 When I was a kid, my mom and I made a plan to go see the ‘Phantom of the Opera’…

Sadly, that was one of those plans that we never followed through on and here we are… after 35 years on Broadway, the ‘Phantom of the Opera’ is closing.

I mean, there’s still time to see it I guess, but living in Texas and traveling to Broadway just isn’t going to happen for me right now.

‘The Phantom of the Opera’ is Broadway’s longest-running shows and will apparently close on February 18th, 2023.

According to The Broadway League, the pandemic slowed ticket sales and most recently attendance has dropped from 255,000 in May to about 180,000 in September.

It’s rumored that ‘The Phantom of the Opera’ may return down the road in a much cheaper iteration, which honestly may make it easier for more people to experience.

This will open the Majestic Theatre for a new show for the first time in almost 4 decades, I wonder what it will be?

If you will be traveling internationally, you can still catch the show in London where the production will celebrate its 36th year this October.

It appears that China is also debuting the show in Mandarin language in 2023 and I read that there will also be a Spanish language production with Antonio Banderas!