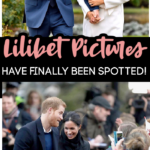 The Duke and Duchess of Sussex welcomed baby Lilibet into the world two months ago. But many of us have yet to see her!

But the two revealed a picture of her on Meghan’s 40th birthday. BUT…if you blink, you’ll miss it!

Meghan posted a video called “40×40” on her birthday of her and Melissa McCarthy on a zoom call for the Meghan and Harry’s Archewell Foundation website.

“Because I’m turning 40, I’m asking 40 friends to donate 40 minutes of their time to help mentor a woman who’s mobilizing into the workforce. Over two million women in the U.S. alone and tens of millions around the world have lost their jobs due to COVID.”

Although the video was a great way to announce her new initiative, it also gave her the opportunity to show off her new home AND her new baby.

In one part of the video, a three-picture frame could be seen on Meghan’s desk, which featured three black-and-white photos of Lilibet.

It’s not much, but hey…it’s something! I am looking forward to seeing what Lilibet looks like with the beautiful blend of parents!