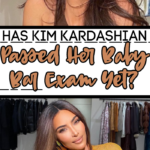 The final season of Keeping Up With The Kardashians officially premiered on Thursday and of course, there is lot of drama.

One question that seems to be on the mind for fans of the show is whether or not Kim Kardashian has passed the baby bar exam yet.

Since we do see Kim taking the exam during the show’s season 20 premiere, there’s only question left to answer.

For those who don’t know, the baby bar exam is mandatory for first year law students who are attending unaccredited schools.

Students must pass this exam in order to be eligible to sit for the bar.

“Because I’m in law school in an untraditional way, after year one you have to take the baby bar, which is a one day version of the bar,” Kim explains. “The test is seven hours long and has four hour-long essays that you have to write and then it has 300 multiple choice questions.” However, it’s never actually revealed if she passed it or not.

Although it is still uncertain whether or not the famous celebrity has passed or not since Kim has not confirmed or denied anything, judging by her recent tweets, all signs lead to yes!

Given that KUWTK highlights some of Kim’s law journey, we can assume that fans will find out soon enough!