I didn’t know I grew up in a hoarder house. But thanks to reality TV, we now have a name for it. I know what you’re picturing: Piles of rotting garbage stacked to the ceiling next stacks of desiccated rat carcasses. In my case, this couldn’t be further from the truth. We had a clean kitchen, home cooked meals, new clothes, and all the books we could read.

We just had too much stuff. My dad was what I liked to call, a “Usefulness” hoarder. We threw out garbage, no problem. But if he thought he could use something, he’d keep it. He also couldn’t figure out what to do with it since WE HAD TOO MUCH STUFF. But despite the Room of Requirement levels of odds and ends, my Dad could reach into any pile and come up with whatever random thingamabob that he was looking for. Which made me realize…I, too, had super powers. 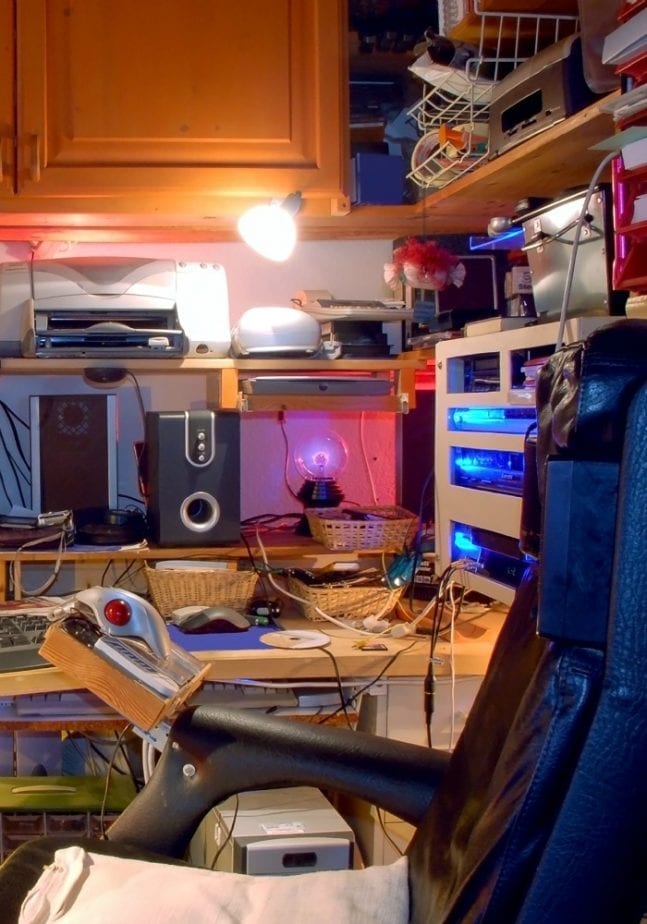 The Super Power: I know where everything in my house is.

Seriously. I can tell you what is in every box in my attic and cupboard in the kitchen. I can accurately recite what’s in the third pile to the left of the toaster. I had to develop this power because otherwise I’d never be able to find anything. A hoarder house is nothing but visual noise. My brain had to record at a glance all sorts of random things, which came in handy when I worked retail. But this power comes at a cost…

The Kryptonite: When I can’t find my own stuff…a monster must have eaten it.
If I go to the third pile on the left next to the toaster, confidently expecting to find something and it’s not there? I shut down.

I’ll shuffle through surrounding piles of papers, searching. But all the while my eye will drift back to the spot I last saw the thing, like it will magically materialize. My brain will fixate so hard on a spot I’ve had the not-so-fleeting thought about taking a jackhammer to the floor. Like Kitty Pryde just wandered through and decided to play a prank on me by pulling my missing item a few inches under the concrete. Which is bizarre because…

The Super Power: I can find anything that doesn’t belong to me.

As fixated as I will be on the spot I last saw something that was mine, is how fixated I will become on finding something that someone else has lost. Free of the burden of “The Last Place I Saw It”, I could usually excavate the smallest earring from the largest pile of laundry.

The Kryptonite: Did I mention I got fixated? I’d wake up at 3 AM and sneak into my mom’s room to double check that I searched in the back corner of the closet behind ALL the boxes even though I already had during daylight hours. Twice.

Some of you won’t think this is a super power. You are wrong. There are piles of books and magazines in my house when I get home. I don’t see them. No. I LITERALLY don’t see them. They just become part of the household environment until they reach critical mass and I go on a cleaning spree. But until then? Mess doesn’t stress me out. Unfortunately, I often have to remind myself…

The Kryptonite: The mess bothers other people.

I’m very aware that I’m messy. I’m also aware that other people aren’t and I do clean up after myself in shared spaces. But sometimes my definition of messy is WAAAAY different than other people’s. If a space will take more than 5 minutes to tidy? Messy. 30 seconds? That’s not mess. That’s progress.

Luckily my husband and I have the same mess tolerance. But we don’t have a hoarder house. Yet.

But…it’s in my genes. So, sometimes I just have to make myself stop, look around, and ask, “If a film crew from A&E walked in here right now, would they have an episode?”