First off, June Cleaver is a freakin’ liar. No one smiles that much after spending all day cleaning their house, taking care of kids, and somehow creating a dinner fit for magazine covers. No. In fact, if she were real and expected to do all that she’d probably be crying in a corner by 4:00 and pointing at the phone telling her husband to order pizza if he wants a hot meal. 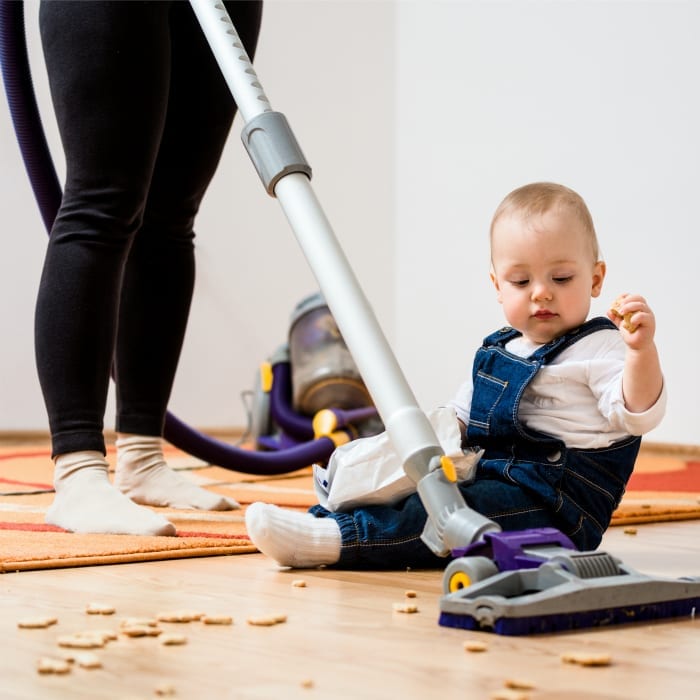 How Having A Housekeeper Saved My Marriage…

Not saying no mom can do it all, but I’m pretty sure the ones who say they do have a secret stash of Phen/Fen somewhere and they aren’t sharing.

No, for most of us, it’s a struggle to keep the tidal wave of dirty laundry from burying our children come Saturday, much less making sure the rest of the house is perfect.

For me it would be impossible. And it was. For the longest time I tried to do it all. I woke up at the plumber’s crack of dawn to make sure my kiddo had breakfast and hubster was out the door with a smile, before going about my own job. Yes, I’m a working mom. No, I don’t think it takes away from my family. Yes, I think SAHM’s are saints walking amongst us…mostly because I don’t think it’s something I’d ever want to be. But, I digress…

With both of us working, every single day was a battle of: who was making dinner, why wasn’t the house clean, where are my clothes, did we remember to lock the front door, and no, we aren’t having sex…one or both of us is WAY too tired.

Our marriage was dying.

I tried though. I tried to be the everything mom that the world expects me to be…fix the school lunches, make the properly proportioned dinners, washed laundry, dusted. Oh Holy Cow. It went on and on. I’m pretty sure during that time in my life I slept an average of two to three hours before having to get up and do it all again.

Turns out, a person can live on two to three hours of sleep for approximately two years before cracking.

I cracked when my daughter started cheerleading. Suddenly my already busy schedule now also included cheer bows, practice, pizza parties, games, sleepovers, and somehow I was still expected to have a clean home.

Even more so now because I had other cheer moms coming over to run their delicate little fingertips along my dusty shelves and cluck their tongues when I didn’t pass inspection.

The day finally came where a lack of sleep, lack of sex, and lack of having any effs left to give made me throw my hands in the air and say, “I’m done. I’m hiring a housekeeper and if you don’t like it, then you can do it yourself.”

My hubster, being the smart man that he is, kept his trap shut and pretty soon we had another woman in our marriage.

And she saved me.

It’s weird to imagine that one little change making a huge difference, but suddenly I had someone else taking care of the things I was stressing over, and all that extra energy came back to me.

Suddenly I was able to sleep again, I had more time for my kiddo, and let’s just say sleepy-time with the spouse wasn’t always spent sleeping.

So judge me if you’d like, but like I said…June Cleaver does not live here. She is a myth. Someone tortured mothers tell themselves they have to be like or they’ll go to mommy hell.

In my opinion, I was already IN mommy hell. And now that I’ve tasted sweet freedom, I’m NEVER going back.

Seriously, Amen! I don't know what I would do without our housekeeper. She only comes twice a month but I definitley look forward to those cleaning days. I haven't had to scrub a toilet or shower since I moved into our house (5 years!) because I have someone who does it for me! We cut out cable so we could get a housekeeper because it is THAT important to our family life.

I'd like to hear more about the "how" the housekeeper saved your marriage (not just that she did). How often does she come by? Which chores/tasks/errands does she take care of? How expensive is it to hire someone?