At some point in our lives or another, we have all had to learn how to set boundaries and expectations for the way we allow other people to treat us. While some of us have a natural knack for this sort of thing, some of us are still learning when and how to draw the line. When someone in your family oversteps in a way that you just can’t ignore- it takes on a whole new life than if it were just a friend or co-worker. Here is how to deal when a family member crosses the line. 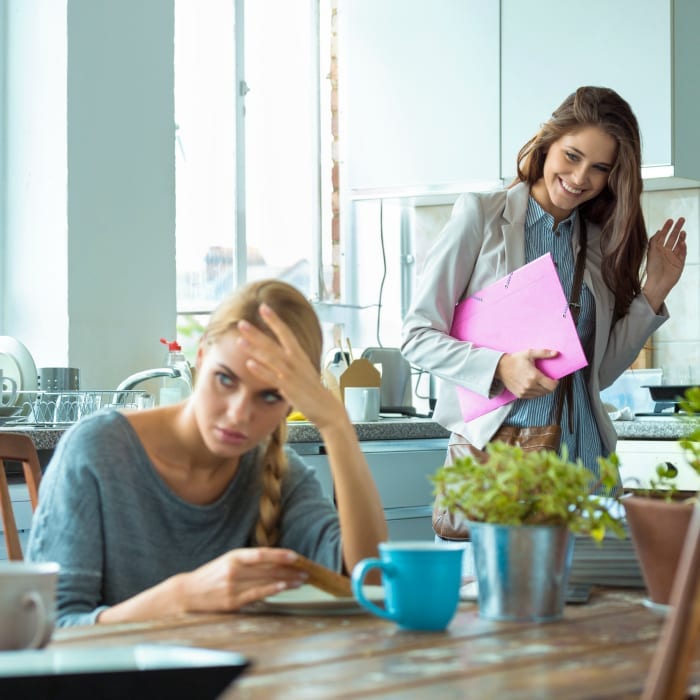 In my experience, my reluctance to speak up when someone makes me angry is learned behavior. In my family, we take the slight in silence, gripe about it to other people in the family, get ourselves all worked up, until it ultimately ends in a screaming match and hurt feelings all around. Not exactly healthy, huh? But you know what? In my family; that’s how we all do it. That’s how we’ve always done it. Until I decided not to anymore.

We, as a family, have a pattern of not setting boundaries for each other, and whether we like to admit it or not, that doormat mentality crosses over into life outside of family. I decided that that unnecessary stress and anxiety was something I didn’t want to teach to my children, and that by letting myself get dragged into it, I was teaching them those same behavior patterns. I’m not okay with being that sort of parent. We’ve all heard it a million times, but I’m going to say it again, because it’s true.

We decide how other people treat us.

The first step to dealing with a family member who crosses the line is drawing the line in the first place. If you sense your sister, aunt, or cousin pushing your buttons, disrespecting you in any way, or belittling you- let them know that you’re not going to respond to it. If they continue, just end the conversation and walk away. Don’t let it get to the point where you’re bitter and angry. Understand that people might be shocked, or think you’re kidding, especially if you had not been particularly assertive in the past. You can’t expect to be taken seriously immediately if you have never stood up to yourself before. Give them a little leeway here to get used to your new boundaries. In all probability, they haven’t learned to set boundaries themselves. The most important part of this is to stay calm and not lose your temper. Remaining collected will show your seriousness, and hopefully, set the precedent for how you expect to be treated going forwards.

If the problem persists, just cut off contact for a little while. At this point, you’ve already tried to set boundaries, and this person is has no intention of staying within them. Yeah, it seems harsh but, this is really the only recourse you have. You owe it to yourself to follow through with the rules you’ve set in place. The good news is, that since you haven’t gotten angry or lashed out, you can count on being taken seriously and not relegated to being ’emotional’ or ‘hot- tempered’. It also leaves the door open for an apology and forgiveness.

If your relative gets angry at you, just remind them that you repeatedly attempted to let them know that you were frustrated, and they didn’t listen. They gave you no other choice. This is usually the point when they will try and guilt you into backing down. All you have to do is call out the behavior. Just ask them if they’re trying to make you feel guilty for standing up for yourself, and do it repeatedly, every time they try to manipulate you. Keep in mind that when it get to this point, most people will start to see that you are no longer giving them power over you, and guilting someone is a last resort.

If you both can’t come to an understanding- just love each other from afar, and keep things civil. If that just isn’t an option, you might have to consider cutting them out of your life. There is not room in your life for someone who deliberately and repeatedly disrespects you. You gave this person every opportunity to do right by you, and they didn’t. It’s their loss.

These are all tactics you can use to hopefully transform your relationship with someone for the better of both people. I know that for me, it has built a happier and more communicative family dynamic.

Do you have any suggestions? Leave them in the comments below!

For playing free cards game online this platform is safe and secure from every point of view so here you can play klondike solitaire free online cards games which are available online in the best quality.

You are right. When you have done everything to make amends and family members continue to mistreat you, it is time to cut ties and don't look back. It is okay to have regrets, but don't harbor guilt. Others mistreat us for various reasons: It could be they are jealous of us, they feel insecure, or they are so narcissistic they don't care what you think. Look elsewhere for companionship. These people don't have what it takes to get along properly.