I consider myself a pretty social person. That is to say, I’m not awkward in a group setting, and most of the time, I’m downright fun.

Until I get around big time authors.

Then I’m something of an idiot. The first time I met my now-good-friend Rosemary Clement-Moore I was such a moron. I didn’t know what to say, and I was worried I’d scared her off forever with my fangirlness. Fortunately, it turns out she’s just a big of a dork as me.

This weekend I went to a book signing for Holly Black and Sarah Rees Brennan. I haven’t read their books, but have heard good things. Since I wasn’t a crazy-freak fan or anything I was fairly sure I could talk to them without sounding like a complete moron. So that was a total win. I’d get to meet successful authors with super talent, but I didn’t actually know it yet.

Then I arrived at the bookstore…. 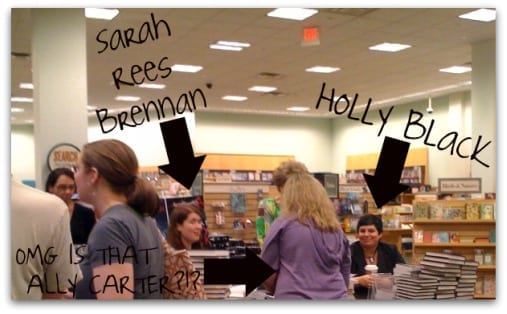 Yeah, internet, you read that right. Ally Carter was standing at the table signing books. I knew she was in town, but specifically missed her signing because I knew I’d make a damn fool out of myself. This was huge Huge HUGE for me. She’s everything I want to be as a writer, and I was standing close enough to touch her! (I didn’t though–that would have been so awkward.)

So what did I do? I told her she was my literary hero. Like she wore a cape and fought crime at night or something. (Only instead of the Lasso of Truth she had a Bookmark.)

How exciting! And you didn't make an idiot out of yourself - not even a little bit. Also? I'm pretty sure that Ally Carter does wear a cape and brandish a magic book mark. .-= Rhonda Cowsert´s last blog ..YA? Why? =-.

I was at the book signing too! What a fun surprise, huh? I blogged about it too and posted photos.

@Melina Corriveau, It was AWESOME, right?!? Glad you loved it too!

Aw, just think. Someday you might be somebody else's LITERARY HERO! .-= @jmartinlibrary´s last blog ..YOU by Charles Benoit =-.

Oh yeah, I'm so awkward. I just want to tell my fav famous people that we should be best friends.

But how to do that without sounding crazy??? .-= Olleymae´s last blog ..Back to being a semi-professional writer =-.