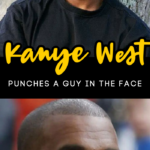 What in the actual heck?

Kanye — AKA “Ye” — is great at maintaining personal stories that are perfect ammunition for tabloid fodder, but I didn’t see this one coming.

Police have confirmed that the incident happened on Thursday morning near the members-only club,  Soho Warehouse.

What a shock. Kanye was at a swanky members-only club.

Police said it was a misdemeanor battery report and there were no serious injuries, according to CBS Los Angeles.

So what happened? Apparently the artist formerly known as Kanye West wasn’t in the mood to give an autograph.

I’m sure there’s a bit more to the story than that, but that’s what we know.

According to TMZ, Kanye got into an argument with a man who asked for an autograph outside the club. I don’t know if he was being taunted, or what, but he didn’t want to sign the autograph.

Ye reportedly got angry, pushed, and then hit the man.

This all happened at 3 o’clock in the morning. Nuthin’ good happens after midnight, I tell ya!

The police had to respond to the scene, but no arrests were made. Just a misdemeanor battery report was filed against Ye.

This news comes on the heels of — well, a bunch of weird Kanye stuff.

He claimed that he was going to get Kim Kardashian back as his wife.

He bought the house across from Kim Kardashian.

It was also announced that he is going to headline the Coachella Valley Music and Arts Festival — a meeting ground for hipsters and celebrities alike — which will take place in April.

We applaud you, Ye, for keeping your name front and center in the headlines, but let’s try not to hit people, okay?

Good gosh, I feel like I’m talking to my toddler. LOL!!