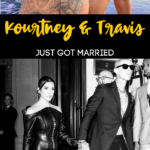 I never dreamed of having a large wedding as a young girl, my goal was a Las Vegas wedding at a drive-thru with an Elvis impersonator.

Looks like Kourtney Kardashian And Travis Barker partially followed my dreams by heading to Las Vegas and getting “married” by an Elvis impersonator.

TMZ reported that Kourtney and Travis were already in Las Vegas for the Grammys so they went ahead and got married in the middle of the night.

While they did have a chapel wedding, it wasn’t actually legalized (no papers were involved).

Just a few hours after Travis Barker performed at the Grammy Awards, they headed to an all-night chapel and had the ceremony at 1:30 AM, Monday morning.

They even showed up with their own photographer to capture the moment and as Kourtney put it, it was practice for them for their real wedding.

I love that they stuck to a Las Vegas tradition by having an Elvis impersonator conduct the ceremony!

Kourtney and Travis have been engaged to be married since October 2021.