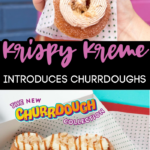 If you’ve ever had to decide between a churro and a doughnut for dessert, you no longer have to choose between the two.

Thanks to Krispy Kreme, the doughnut chain has made the decision for those of us with a major sweet tooth and has combined two favorite sweet treats into one!

Two sweets that tasty great separately, but incredibly delicious together have been created to make the ChurrDough.

Think the length of a Churro and the consistency of a doughnut with the cinnamon taste of the Churro!

Per Krispy Kreme, the sweet treats shop says they’ve taken the two best parts of both the Churro and the Doughnut to make their new drool worthy dessert.

Featuring three new flavors including Cinnamon Sugar, Cookies & Kreme, and Dulce de Leche Churrdoughs, the only decision you’ll be making is which flavor tastes the best to you!

So rather than picking one or the other, give the ChurroDough a chance!

Available now until September 18 at Krispy Kreme stores, excuse me while I go try the Dulce de Leche Churrdough!