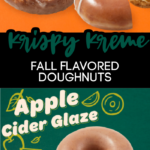 Let’s just say that pumpkin spice is a major flavor when it comes down to the Fall season.

The Pumpkin Spice Original Filled, Cheesecake which is a sweet treat glazed over in pumpkin spice, filled with creamy cheesecake, and topped with an icing drizzle!

Finally, the Pumpkin Spice Cake is exactly how it sounds; a glazed, old-fashioned pumpkin spice cake flavored doughnut at your service.

Keep in mind that the Pumpkin Spice, Maple Glaze and Apple Cider Glaze doughnuts will all release on different weeks, while you can expect Pumpkin Spice to return on September 6th until the 12th.

The Apple Cider Glaze doughnuts release from September 13th up until September 19th and Maple Glaze begins September 20th until the 26th.

Putting aside all several doughnuts, Krispy Kreme is also bringing back three fall drinks to wash down your doughnuts!