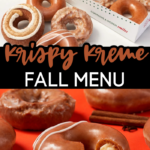 Krispy Kreme says they’re not waiting any longer, at least for their fall flavored doughnuts and coffee.

Thanks to Krispy Kreme, fall is arriving earlier this year, even if the weather outside is sweltering.

Although with a few familiar faces always comes a couple of newbies including an entirely new doughnut that encapsulates fall and a new iced coffee that wraps an entire pumpkin pie in a single cup.

Introducing the new Pumpkin Spice Doughnut that’s dipped in pumpkin spice and a sugar blend; the donut’s then topped with a vanilla swirl with added coffee buttercream for an extra sweet touch.

And alongside the new doughnut includes the new Pumpkin Spice Iced Coffee including caffeine blended with pumpkin pie sauce.

The fall doughnuts and coffee arrive as early as August 8, so beat it summer, autumn is coming!