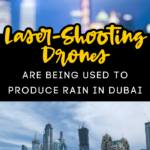 It is no surprise to most of the nation that it is hella hot this summer — we’re talking, Satan’s doorstep hot.

But, even with as hot as we have been here in the good ol’ U.S., Dubai is suffering a heat that I can’t even fathom!

It is so hot that, to combat the soaring temps, the National Center of Meteorology in the United Arab Emirates is actually making it rain.

How in the world do you make it rain, you ask?

They are using drones that shoot laser-beams into the clouds to generate rainfall artificially.

Professor Giles Harrison, who is the Professor of Atmospheric Physics in the Department of Meteorology at the University of Reading, explains that there are droplets in clouds, even in non-thunderstorm clouds, and those droplets carry a charge.

So, the drones that the NCM in the UAE are using shoot laser beams into the clouds which super charges them with electricity.

The Emirati Weather Center is using drones to ‘zap’ the air into submission. These drones are designed to target certain clouds and use electrical discharges via concentrated lasers to forcibly pool water droplets in the air, thus triggering desired rainfall.

This technology is crucial for Dubai, because most of the rainfall is generated in the winter months — and it only equates to 4 inches of rainfall per year!

Rainfall and cloud cover help to cool down the temperatures in Dubai, which are soaring up around 125 degrees fahrenheit (51.8 degrees celsius) this summer — but they usually don’t see much natural rain, like AT ALL, during the summer months.

That’s why this new laser-induced artificial rain is so critical for Dubai.

Now, you might have heard of “cloud seeding.” That is a technology that has been employed since the 1920s.

During times of intense drought, cloud seeding has been practiced as a way to supplement the water supply.

Cloud seeding involves using aircraft or drones to add small particles of silver iodide, which have a structure similar to ice, to clouds.

Historically, cloud seeding was not an exact science. Sometimes it would work, other times it just left disappointment.

But, last year, researchers were able to step it up, and make cloud seeding a viable alternative to natural rain.

It is an inexpensive way to help add water to our basins, in small, incremental amounts over long periods of time.

In the past Dubai has employed this rain seeding technique to try and shock the clouds into producing rain.

But the country is now taking a different approach in their quest for water security.

Bring on the laser-shooting drones!

This artificial rain isn’t all fun and games. This laser-produced rain could trigger massive flooding in the area, which could certainly be an unintended disaster.

Another thing to worry about is this technology becoming privatized, but that is a story for another time.