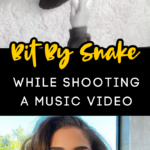 I pretty much can’t think of a scenario which would cause me to need to be close enough for a snake to bite me on the chin. In fact, keep me as far from those nope ropes as possible!

But, one singer was the unfortunate recipient of a bite straight to the face from one of those slithering serpents, and it had to hurt — both her pride and her chin!!

Maeta, one of the newest additions to Roc Nation, was shooting a music video in which she was surrounded by snakes. I mean, right there, the warning flags go shooting up, right?!?

In the 5 second clip posted to Instagram, the siren of the song is seen lying on the floor, wearing black lace, and draped in snakes.

At first, she smiles as they start to put the snakes on her. But then, the very next second, she is pulling a black snake off her chin.

She captioned the video, “what I go through to make videos for y’all.”

Luckily, we are told that none of the snakes were venomous. So, I guess there’s at least that.

Of course, now she has to be traumatized for life — and the whole thing was caught on camera!

If, for some reason you don’t know who Maeta is, she was selected as one of PEOPLE’s emerging artists to watch last fall.

She started by releasing her music on SoundCloud before she was picked up by Roc Nation.

2021 Was a big year for Maeta. Not only is she now a member of Roc Nation, but she released her first album, Habits, featuring tracks such as “Teen Scene,” “Toxic,” and “Habits.”

AND, she can now add “bit in the face by a snake” to her list of accomplishments this year!

You can see the full 5-second clip of Maeta getting bitten by the snake HERE.