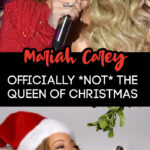 It’s not even Thanksgiving yet, and I have already heard Mariah Carey’s “All I Want For Christmas Is You” no less than 7,092 times.

It is the unofficial anthem of Christmas, and you simply can’t escape it.

From movies, to radio, to grocery store music, the infamous song is EVERYWHERE.

For years now, the world has touted Mariah Carey as the “Queen of Christmas.”

Maria Carey recently embarked on a mission to trademark the title of “Queen of Christmas.”

She wanted to register the term legally, so that only she could use it — making her the OFFICIAL “Queen of Christmas.”

This would have garnered her the legal right to block anyone that tried to use the term.

In theory, trademarking the term seems innocent enough — I mean she IS the “Queen of Christmas,” right?

See, Elizabeth Chan is a full-time Christmas recording artist, and she took issue with the trademark.

According to Scary Mommy, Elizabeth Chan and her attorney quickly filed a formal declaration of opposition to the trademark.

Ms. Chan believes that Christmas belongs to everyone, and nobody should have the right to own it.

I feel very strongly that no one person should hold onto anything around Christmas or monopolize it in the way that Mariah seeks to in perpetuity. That’s just not the right thing to do. Christmas is for everyone. It’s meant to be shared; it’s not meant to be owned.

And it’s not just about the music business — She’s trying to trademark this in every imaginable way — clothing, liquor products, masks, dog collars — it’s all over the map.

If you knit a ‘queen of Christmas’ sweater, you should be able to sell it on Etsy to somebody else so they can buy it for their grandma. It’s crazy — it would have that breadth of registration.

So, the world isn’t getting an OFFICIAL “Queen of Christmas” anytime soon.

But, maybe Elizabeth Chan is right. Christmas is a time for EVERYONE.

Stores have already made Christmas a money-making season, with many putting their decorations out earlier and earlier.

Christmas in July, anyone?

Maybe we just need to take a step back and enjoy the season without crowning a new queen.