Matthew McConaughey Is Considering Running For Governor Of Texas 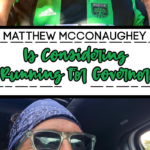 Kayne West and The Rock aren’t the only celebrities who desire a position in politics.

As it turns out, ‘Magic Mike’ star announced Wednesday on an episode of “The Balanced Voice” podcast that he’s seriously considering running for Governor.

If you haven’t already guessed who this person is yet, actor Matthew McConaughey is considering dabbling in the political field.

“I’m looking into now again, what is my leadership role?” the 51-year-old Oscar winner said.

“Because I do think I have some things to teach and share, and what is my role? What’s my category in my next chapter of life that I’m going into?”

As of recently, Texas political leaders have been making headlines and now, the actor whose political beliefs are very unclear who also has no political experience has left Twitter in an uproar ever since his announcement.

1 shares
You Can Plant Flowers That Look Like Little Naked Men
← Previous
You Don't Have To Go Down Under To Get This Legendary Kangaroo Macchiato from Starbucks
Next →
Click here to cancel reply.