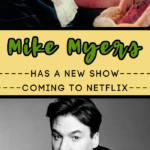 Mike Myers has CREATED and will STAR IN a new show for Netflix, and I CAN’T wait!

Where are my 1990s kids at? *Proudly Raises Both Hands*

One of my FAVORITE people from the 90s, Mike Myers, was definitely a heavy hitter in the 1990s, with movies like Wayne’s World, So I Married an Axe Murderer, and Austin Powers.

Well my friends, if you are a fan of the funny man, I have good news for you — He Is Back!!

Myers has created a new six-episode series for Netflix, and he is set to play SEVEN characters, himself.

The show is called The Pentaverate, and it just added six new hard hitters to the cast — are you ready for this lineup?

I’m sure you recognize many, if not ALL of those names — this show is going to be so great!!

So, the name of the show, The Pentaverate, where did it come from and what does it mean?

You might remember in So I Married an Axe Murderer — one of the BEST films ever made IMHO — Stuart Mackenzie claims there is a secret society — a very Illuminati-esque group — comprised of 5 entities that have been working to control EVERYTHING in the world.

In the film, Stuart (played by Mike Myers) says the Pentaverate includes the Queen, the Vatican, the Gettys, the Rothschilds, and Colonel Sanders.

Well, it’s a well-known fact, Sunny Jim, that there’s a secret society of the five wealthiest people in the world, known as The Pentaverate, who run everything in the world, including the news papers, and meet tri-annually at the secret country mansion in Colorado known as “The Meadows.” — The Queen, The Vatican, the Gettys, the Rothschilds, and Colonel Sanders — before he went tits up.

So I Married an Axe Murderer

Now, it’s unknown if this new show will follow the exact framework that Stuart Mackenzie laid out for us, but it will be a similar structure, for sure.

In the half-hour series, five men have been working to influence world events for the greater good since the Black Plague of 1347. As the show begins, one unlikely Canadian journalist finds himself embroiled in a mission to uncover the truth and just possibly save the world himself.

The show — which is sounding like it has the potential to be HILARIOUS — is currently in production.

We will let you know as we learn more about when The Pentaverate is going to drop on Netflix.