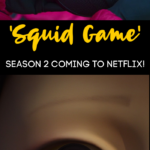 Thanks to Netflix, the streaming company just released big news regarding their most watched show ever!

And if you guessed Squid Game, you’re correct!

Not only did Netflix annouce that Squid Game season 2 will be in fact coming to Netflix, but there are some important details we didn’t know that we now do know!

According to the recent announcement, an entire new round is coming to Squid Game, so does that mean more kid’s games to play?

Gi-hun, the man who won the game show is also returning, along with The Front Man who will also be making a comeback appearance!

We’re also told that the man in the suit with ddakji might return and a new character will also be introduced, specifically Young-hee’s boyfriend, Cheol-su.

While we don’t know when season two will be released to Netflix just yet, another round is coming!