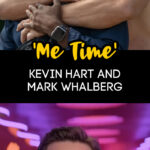 There is a new comedy on Netflix called Me Time, and it stars Kevin Hart and Mark Wahlberg.

That right there is reason enough to grab the remote and start streaming the Netflix original, right?!?

But, here’s another reason to run and watch the new comedy.

It has only been on the streaming network for 24 hours, and it is already the #1 movie on the site, climbing past great flix like Day Shift (the new Jamie Foxx vampire flick) and Running With The Devil (the True Crime story of John McAfee).

What Is Me Time About?

Sonny (Kevin Hart) is a stay-at-home dad who wants nothing more than a little time to himself.

As often happens with the parents at home, his life revolves around his kids, and his time is never his own.

He finally gets his big chance at alone time when his family goes on vacation, leaving him to fend for himself at home.

Sonny thinks he’s getting a relaxing time by himself, but that’s not what ends up happening.

His good friend Huck (Mark Wahlberg) shows up, and begs Sonny to come to his birthday party — which Sonny KNOWS is going to be a little wild.

Sonny ends up going to the party — and it turns into a wild time in the middle of nowhere.

Hilarity ensues, as you can imagine. Think cliff jumping in a flying wingsuit, getting attacked by a mountain lion, and a little bit of flame thrower fun.

This is one Netflix original that you are NOT going to want to miss.

You can see the trailer for Me Time below.