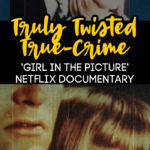 True crime is scarier than fictional horror movies… well in my opinion of course.

Seeing the real monsters that walk among us in this world is way more disturbing than any horror movie.

Netflix just added a new true-crime documentary and I couldn’t stop watching it!

The newly released documentary is called ‘Girl in the Picture’

In this documentary, a woman found dying by a road leaves behind a son, a man claiming to be her husband — and a mystery that unfolds like a nightmare.

This true-crime story has a little bit of everything disturbing, including kidnapping, rape, incest, and murder.

‘Girl in the Picture’ is about the mysterious life and death of Sharon Marshall who traveled around the country with her father, Franklin Floyd.

Franklin was a felon and a fugitive, he used to change Sharon’s name and even took her to strip clubs so that she could earn money for him… her own father, or was he?

The Netflix documentary covers the mystery that spans 30 years and uncovers horrid truths about Sharon Marshall and her life, who was she really?

Her father, Franklin Floyd was a violent man and Shaaron was a smart girl who had dreams of becoming an aerospace engineer… those dreams were crushed.

A journalist named Matt Birkbeck found a photograph of Sharon with Floyd back in 2002 and he had questions because something felt off, which led to an investigation.

Watch the trailer for ‘Girl in the Picture‘ below and stream it on Netflix beginning July 6thth, 2022.