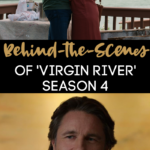 As we patiently wait for season four of Virgin River, anticipation is high for the series return and how could it not?

After many question marks were left at the end of several scenes that set up season four, we’re all wondering who’s the father of Mel’s baby? Where is Preacher? Is Hope okay and many more unanswered thoughts.

And while we wait for our questions to be answered accordingly, a sneak peak of a few behind-the-scene shots were casually posted to Instagram.

Thanks to Alexandra Breckenridge and Martin Henderson’s unique dance moves, fans were able to see a ‘bts’ shot of the co-stars dancing to “Hung Up” by Madonna in Mel’s kitchen.

Grooving specifically to the lyric, “Time goes by so slowly”, the song seems appropriate as we wait for season four to drop ten new episodes.

Another behind-the-scenes look included Alexandra and Martin (Mel and Jack), smiling and laughing with a caption that read, “What’s so funny? Find out in one month…. 😉 Season 4 drops July 20th,” on Instagram.

So while we wait for season four to release on Netflix, is it too much to ask for another sneak peak or a behind-the-scenes look at what’s coming next!

And just as reminder, (if you even need one) season four of Virgin River releases July 20th!