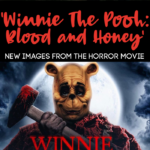 This ain’t no bedtime story!

Remember when I told you all about the ‘Winnie the Pooh: Blood and Honey’ movie that’s coming out?

Everyone was like noooo this ain’t real… well, it’s 100% real and I even posted about it here.

No, it isn’t ruining childhoods either, just don’t let your children watch a gore-filled horror movie and everything will be just fine.

Personally, I can’t wait to see the murderous masterpiece (that I expect it to be), full-on B-movie horror is the best!

The first look images were released by USA TODAY and I feel like this is going to be awesome!

Christopher Robin [abandoned Pooh and Piglet to go to college] is pulled away from them, and he’s not [given] them food, it’s made Pooh and Piglet’s life quite difficult.

Because they’ve had to fend for themselves so much, they’ve essentially become feral. So they’ve gone back to their animal roots. They’re no longer tame: they’re like a vicious bear and pig who want to go around and try and find prey.

Filming for the horror film wrapped last May, which was just 5 months after the characters entered public domain!