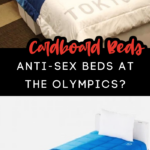 You would think that being in the Olympics was a huge prestigious accomplishment that came with elaborate perks — like staying in fancy rooms with posh surroundings.

Yeah, not so much.

The Olympians have moved into their village in Tokyo, and they are reporting something a little strange — cardboard bedding.

I’m not even joking. They are sleeping on beds, decked out in official Tokyo 2020 bedding, that are made of cardboard.

People are saying that there is a purpose for the beds. It is supposedly to deter sex. Ha!!

The beds, made by the Japanese company Airweave, are made to withstand the weight of a single person (as long as that person weighs less than 440 pounds), and are being dubbed by the Olympians as “anti-sex beds.”

Airweave says there is a different reason that the beds are made of cardboard. The beds fit into the “Tokyo 2020 Games’ sustainability concept of, ‘Be better, together – For the planet and the people.'”

These crazy beds are supposed to be stronger than wooden beds, are made of renewable materials, and will be turned into recycled paper material once the games are over.

Now, we are talking about the bed FRAMES that are made of cardboard. The actual mattress is made of a material that can be recycled into plastic once the games are concluded.

The anti-sex conspiracy theory quickly spread like wildfire through the Olympic village, but SOME are quick to debunk the myth.

Rhys McClenaghan, Irish gymnast, even posted a video of him jumping up and down on the bed to Twitter. He says the anti-sex theory is “FAKE NEWS!!”

Whatever the reason for the cardboard beds, I hope they are at least a little bit comfortable!